The ghoulish monsters and sexy seductresses known as the Darkstalkers are back! Morrigan, Demitri, Bishamon, and Donovan are joined by newcomers like Huitzil, Anakaris, and Q-Bee. It’s man VS demon, robot VS mummy, succubus VS vampire and more, as the creatures of the night battle for control of the darkness!

CBR News: First, what can you tell us about the story we’ll be seeing in this 3-issue series?

KEN SIU-CHONG: The series will have all the sexy succubi and creepy creatures fans would expect in a “Darkstalkers” comic. Old and new readers alike should enjoy the distinctive mix of horror, action, and even a little comedy that gives “Darkstalkers” its uniqueness. Previous readers will also appreciate the fact that we will essentially pick up the story from the first series and finally give it a proper conclusion. Morrigan will finally face off with her father’s arch-nemesis, Demitri; Donovan and Anita’s conflict with the cursed Demon Armor, Bishamon, will come to a head; and the overriding storyline of Pyron’s descent to earth will finally resolve itself. Readers will have lots to look forward to, and we hope this become the first of many new stories in the Darkstalkers universe.

ERIC VEDDER: Its going to kick butt! Also, some characters [from the games] make their first appearance, which I found exciting. Drawing them was a blast, too, since the Darkstalker characters are all so varied in shape and size. I really hope this continues on past these three issues, as I’m sure a lot of fans out there would love to read more about the Darkstalker universe and learn more about the wild characters that inhabit it. I know I would!

JOE VRIENS: Expect a perfect blend of monsters and fight scenes with a healthy helping of character driven story. The Capcom designs make it easy to create a fun filled comic that readers can really sink their teeth into. I saw a sneak peak of the final coloured pages and was quite impressed! Crystal Reid’s inks bring our pencilling styles together, and Espen Grundetjern really brings the art alive with feature quality colours. Kudos to the rest of the art team for creating such a well rounded package!

Ken, how does writing Darkstalkers compare with what you’ve done on the “Street Fighter” books? Does the dark nature of the protagonists make for a different sort of story?

SIU-CHONG: The backstory of “Darkstalkers” is a bit more limited and open to interpretation, so it has really been great to explore these characters with a larger degree of freedom than the rather complex Street Fighter universe that is constantly evolving with each game. It’s also quite liberating being able to really let loose with such fun characters in a supernatural universe where almost anything is in the realm of possibility.

As for the darker side of the story and characters, that probably is one of my favorite elements, considering what a big horror fan I’ve always been. It also does create some interesting stories when one of the “protagonists” feeds on human souls. The Darkstalkers are the real stars of the series, and we humans are just the cannon fodder.

Despite the fact we haven’t had a new Darkstalkers game for some time, Udon’s tribute book seems to have gone over very well and now, of course, there’s the new comic. What do you see as the enduring appeal of these characters?

SIU-CHONG: Part of the characters’ appeal probably has to do with the fact that many of them are Capcom’s takes on classic mythological and movie monsters that will never grow old. Also, the “Darkstalkers” cast includes, simply put, some of the most amazingly designed characters in pop culture. The blending of the classic monsters with an anime/video game design sense resulted in something that was very striking, unique, and hasn’t been equaled since.

VEDDER: Well, as I mentioned earlier, the “Darkstalkers” characters are all so different from one another, and it’s that uniqueness that gives it its appeal. Plus, monsters are always intriguing, especially when Capcom designs them! All the characters have interesting – and sometimes bizarre – stories, and I feel that they’ve encompassed every personality out there. People are bound to relate to one of them… there’s a monster for everyone!

VRIENS: The richness in diversity offers something for everyone. The signature players are all represented with incredible originality. From vampire to werewolf to Frankenstein’s monster, they’re all here and they all ooze that special flavour only Capcom can deliver. Add to the mix some female ghoulies, ranging from cute to downright sexy, and you have yourself a winner. Every corner is covered with this franchise.

What is your own history playing “Darkstalkers” games? What is your favorite game in the series?

SIU-CHONG: I’ve always been a huge fan of the games. I was already a fan of “Street Fighter,” and separately a fan of anything and everything horror. When I discovered that Capcom was combining two of my loves, it completely blew my mind. I primarily played it in the arcade (showing my age!), but I would absolutely love if Capcom decided to either remix the classics onto next-gen systems or make an entirely new game following the success of the new “Street Fighter IV” game.

VEDDER: It’s been quite some time since I’ve played one, and I really, really hope they make a new one using the “SFIV” engine (hint hint Capcom!). I just know that whenever I get a chance to play as Morrigan, I choose her. She’s my favorite Capcom character of all time, and her character is very well rounded in the games. I think “Vampire Savior” or “Darkstalker 3” was my favorite, mostly because of the option to play so many Darkstalkers characters… plus Jedah is just so badass, and I love all the blood!

VRIENS: I always sucked at the Darkstalkers games and preferred to just watch in amazement at the eye candy on screen. The fighting moves were all so over the top and colorful. One of my faves is Bishamon cutting his opponent in half, or Victor’s bum attack – hilarious. I could stare at Talbain’s fluid idle animation all day long with all those claws and teeth flowing throughout his sprites.

Joe and Eric, what has been the most fun or interesting to you about illustrating these characters? Are there any scenes that stick out in your mind as particularly exciting to create?

VEDDER: For me, it’s just an honor to be part of such an exciting title. Darkstalkers has always been my favorite Capcom franchise, and I’ve ruined endless art books trying to draw them. Any time I got my hands on a new poster or pinup, especially of Morrigan, I would hang it up near my art desk and stare at it in awe. Getting to finally illustrate them and to add my own personal flair to them is just overwhelming. Their unique designs make them a challenge and a dream to draw and for me is the most interesting part of the process. Somehow you have to make these wild characters into believable ones that the reader can relate to.

As for favorite scenes thus far, I found that the Anakaris and Huitzil fight was exciting to create. Like most of the Darkstalker characters, they both can transform into wild shapes and sizes while performing super moves. I hope I conveyed the craziness and power of them both on the pages I penciled. I’m really looking forward to planning out the Demitri and Morrigan fight though!

VRIENS: I love the fight scenes most. They’re not only fun to draw, but are also a great way to push yourself as an artist. Drawing a punch or kick is one thing in a comic, but when you have the Darkstalkers versions of these moves you get so much more! Sometimes you’re drawing swords with faces or large energy formed hands grabbing the opponent! A simple attack turns into special effects chaos with these characters – it’s awesome! Bishamon is probably one of my favorites in the series, with that crazy demon face as a torso. I mean, the armour isn’t only shaped like a face, but actually is a face. Plus, he’s a dead samurai which automatically adds a billion to the coolness factor. I’m a big fan of Talbain and Jedah as well, but I’m not sure if I’ll get the chance to draw them in this series. We’ll see! 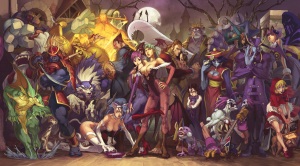